I recently discovered a new game that is great for 9-Ball and 10-Ball training or just for fun. Actually, it’s just a reinterpretation of an old game. I’m talking about American Rotation.

Coach Joe Tucker from the USA invented the game. His goal: to take luck out of the game, reward every ball and teach people good positional play. Kick shots are also to be trained, so only jumping with the playing cue is allowed.

There is a website with game rules and a game score sheet, an app for iOS and Android as well as some videos from professionals. You will find the links to it below.

Wenn Du auf den “Play“-Button klickst, wird das Video von Youtube geladen und gestartet und es werden Informationen an Youtube gesendet. Nähere Informationen erhältst Du in meiner Datenschutzerklärung. If you click on the “Play” button, the video will be loaded and started from YouTube and information will be sent to YouTube. Further information can be found in my privacy policy.

But let’s start with the basic rules. It is based on the well-known game “Rotation”, also known as “61”in the Philippines. It is actually the most played game there. You play rotation with 15 balls. First of all, as in 9 and 10 ball, the lowest numbered ball on the table must always be hit first. Each ball earns as many points as the number written on it. Whoever gets 61 points first wins the game.

American Rotation is a variation that has a slightly different scoring system and some interesting additional rules. Here is an overview: 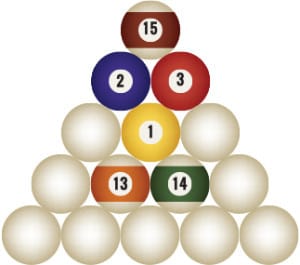 The rules sound complicated at first, but they are very logical and fair. After a few games you get the hang of it and the game is really fun. With American Rotation you can practice very precise positional play, kick and bank shots as well as difficult shots.

Just give it a try!

Here are the additional links again: